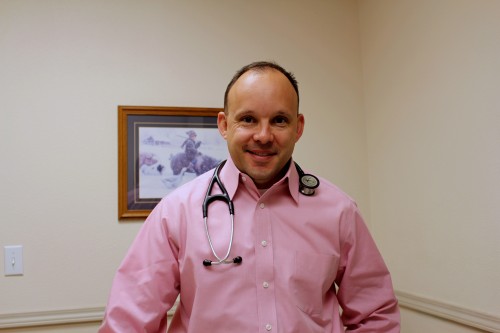 Dr. Garcia is a native New Mexican. He was born in Santa Fe and lived in Bloomfield since kindergarten. He graduated from Bloomfield High School in 1991 and, after a brief term in the United States Navy, went to school in Socooro at New Mexio Tech. After graduating from Tech, he completed Veterinary School from a cooperative program between Oregon and Washington States University in 2000. After two years of practice in Farmington, the wilds of the north called and he practiced at Montana Veterinary Specialists and General Care before returning to Farmington in 2004 to practice at San Juan Veterinary Hospital. Dr. Garcia is married to Andrea and they live with bulldogs Moses, Gertie, and Noelle. He has a stepson, Seth and two beautiful granddaughters named Rosa and Lily. He enjoys falling off of his mountain bike and dirt bike when he is not caring for clients and patients.

Font Resize
Accessibility by WAH
Call Us Text Us